The study of matter subjected to very high pressures makes it possible to describe what happens inside the Earth or exoplanets, but also to highlight remarkable properties that we would like to stabilize at ambient pressure. For example, the solubility of hydrogen in metals increases sharply with pressure until it forms compounds that are very rich in hydrogen: super hydrides. These lose their electrical resistivity and become superconducting at record critical temperatures, such as LaH10, which is superconducting down to -25°C at 1.8 million atmospheres. The synthesis of these new materials under pressure takes place in diamond anvil presses. The pointed shape of the anvils cut from diamond crystals makes it possible to create such pressures. In addition, the transparency of diamond provides a window for optical measurements for visualization and spectroscopy, as well as for X-ray measurements using large synchrotron radiation facilities. Numerous measurements are developed to characterize the sample compressed inside these cells. However, until now, the measurement of magnetic properties has remained very difficult.

Physicists from the Laboratoire Aimé Cotton (ENS Paris-Saclay/CNRS/University Paris-Saclay), in collaboration with CEA and Thales R&T, have overcome this difficulty by observing the response of point defects in the diamond crystal created on the head of one of the two anvils of the cell. These defects were realized by implanting nitrogen ions with a focused ion beam microscope designed with the company Orsay Physics. These ions behave like real quantum spies. In the presence of a magnetic field, they become more or less luminescent, which can be observed by optical microscopy through the anvil. This technique has been validated by the detection of superconductivity in MgB2 by observing the Meissner effect, which reflects the expulsion of the magnetic field from a superconducting material.

The results of this study provide a much better understanding of the relationship between electronic, magnetic and structural properties as a function of pressure. In particular, it will allow the thorough study of numerous metal hydride compositions. These accumulated experimental data will allow to optimize the identification of materials whose superconductivity would persist under conditions close to ambient pressure. Finally, this magnetic detection could enable certain quantum properties of metallic hydrogen, formed when the pressure rises above 4 million atmospheres, and in particular its superconductivity at room temperature, the scientific and industrial stakes of which are considerable.

ENS Paris-Saclay and Thales R&T are partners of the European initiative Quantum Flagship through the ASTERIQS project. The goal of the ASTERIQS project is to exploit atom-like defects in diamond to 1) develop magnetic field sensors for car industry, biology or communications, 2) measure high pressure or temperature or 3) investigate the structure of single molecules or spintronics devices. 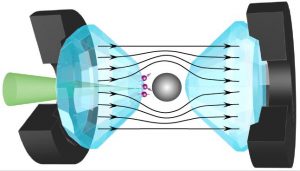 Diamond anvil cell used to study the behaviour of matter under very high pressure. One of the anvils incorporates crystal defects (red) on the surface in the vicinity of the sample (blue). The magnetic field applied to the cell (arrows) is expelled from the sample when it becomes superconducting. The change in the magnetic field lines is then detected in situ by the light emitted by the defects when excited by a green laser.